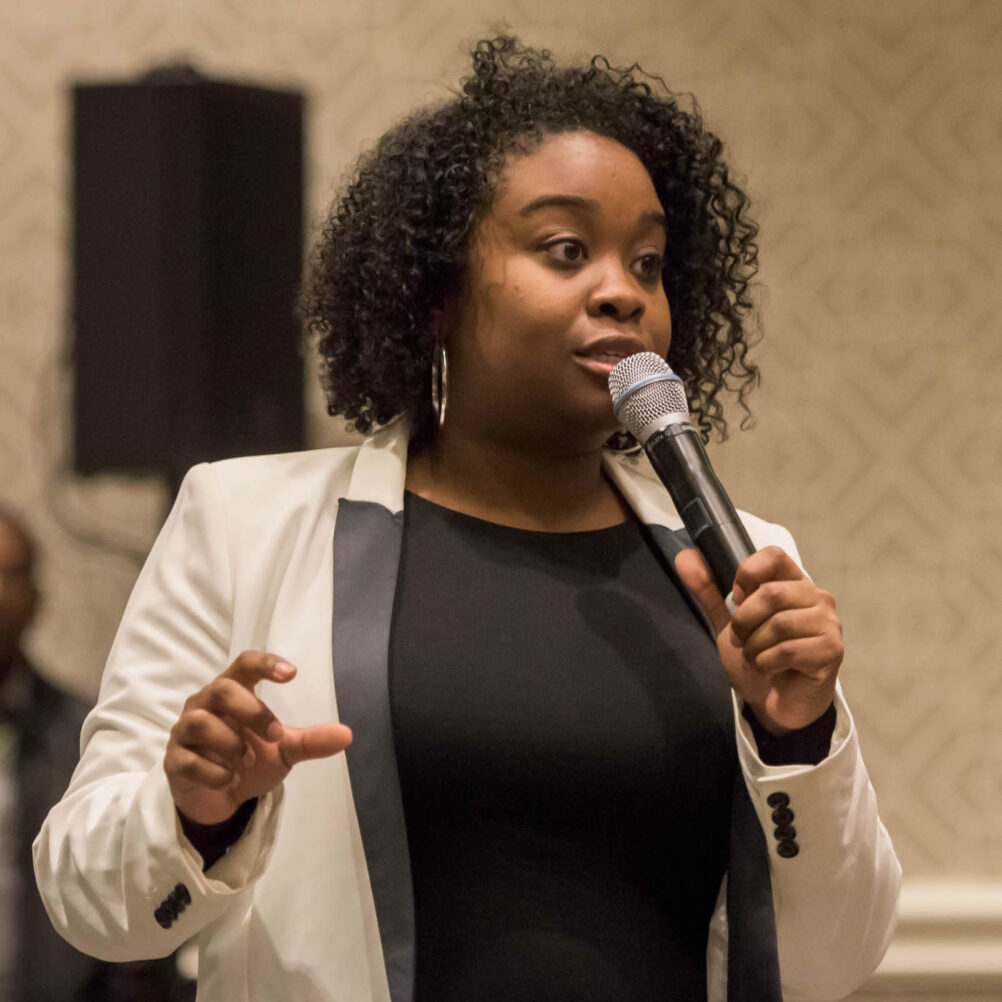 Kassandra Frederique:
“The Drug War is a manifestation of the things that we have failed at. How do we have a conversation about alternatives? How do we build the capacity for our communities to care for each other?

“People create hospitals and churches. But sadly, what we also recognize is that both those institutions have failed us miserably.   If those institutions don’t see that they have helped to create the conditions in this moment, then we’re not actually having a conversation about what their true role is.

“For some people, faith and spirituality fill a spiritual void. But if their institutions still traffic in stigma, miseducation, racism, sexism, a prosperity gospel… [AUDIENCE LAUGHTER]”

Monique Tula:
“I can’t get away from the fact that the War on Drugs is as much driven by capitalism as it is by racism. Today’s governing bodies and corporate CEOs are overwhelmingly white, wealthy, cis men. Although we’re seeing countries like China and India changing some of those demographics, the endgame looks like colonization and domination of the earth’s resources. This keeps the oppressed in a constant state of struggle: constantly distraught, constantly distracted, constantly divided. All we see is ‘other.’ “

Tula:
“Or to upholding those Victorian values and religious dogma—the idea that abstinence and chastity will keep you off of the road to perdition.”

Frederique:
“I’m excited for anyone that wants to help us end the overdose crisis. But what I ask about is the purpose of the faith institutions. Is it for control or as an ally towards freedom? Are you trying to control people or are you trying to give people strategies to take down the structure that created the circumstances we are navigating through right now? We can’t save anybody. We’re not going to fix anybody. We have to give folks the resources to do that healing within themselves.”

Tula:
“I had this spiritual awakening sometime after the last Harm Reduction Conference in New Orleans, and I’ve been chasing that high ever since. I started listening to Eckhart Tolle. His latest book is called A New Earth. He writes about global transformations. One is the global market economy, driven by capitalism.  Another is the reality that people around the world are awakening to a new state of consciousness.  Although we exist in separate bodies in separate forms, the energy that flows through us is the same. At our core we’re actually connected.

“Tolle talks about how many of us are awakening to the primacy of unconditional love. He says that people are gaining this greater self-awareness.  We’re beginning to understand our symbiotic relationship with the planet which cannot be sustained if we continue to exploit its resources with no regard for the future, for our children. If we’re all connected, then harm to one is harm to us all.

“Have you noticed that there is a shift away from top-down decision making, from those values that are rooted in the patriarchy and in white supremacy?

“The reality is that there are enough resources on this planet for all of us.  It is just a matter of how they’re distributed. Policies that formed the foundation of the War on Drugs are rooted in a dying paradigm fueled by capitalism and criminalization.

“Let us remember Audre Lorde’s classic quote, ‘The Master’s Tools Will Never Dismantle the Master’s House.’ Problems can’t be solved with the same level of consciousness that gave rise into them in the first place. We need a shift—a complete shift—a new way of thinking. Deconstruction of the old world needs to happen in order to make space for this new consciousness to emerge.

“We were not in churches very much. But I will say that there have been faith leaders and faith communities that low-key supported harm reduction since the very beginning. The first needle exchange program that I worked in was housed in a church in Cambridge, Massachusetts.

“Harm Reduction with ‘uppercase HR’ is a local grassroots advocacy effort that bridges public health with civil rights and community mobilization. Our aim is to shift power and resources to people most vulnerable to structural violence. We are challenging the prevailing notion that people who use drugs are bad and that they’re broken.”

Frederique:
“I struggle with ‘lowercase harm reduction.’  We think that the goal is syringe exchange or an overdose prevention center. We see Naloxone as harm reduction. Then abstinence-based organizations say, ‘We’re harm reductionists because we use Naloxone.’  That’s not what it is.

“Harm reduction is a beautiful thing.  I consider it a part of my ministry because of the church I belong to. But we operate in the framework of capitalism. This causes us to violate the integrity of our framework.

“We are allowing other institutions to judge our spirituality in a way that we never would.  The fact that the academy can take something like syringe exchange or Naloxone and then talk about moral hazards shows that they are claiming the high ground.

(This dialogue has been edited for clarity and length.)