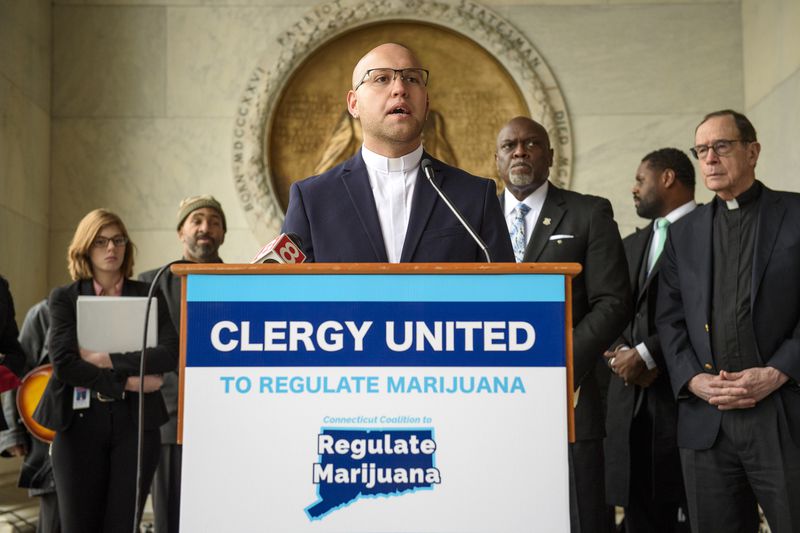 Rev. Stallworth:
“For many years, members of many congregations and communities across our state have been negatively impacted by marijuana prohibition. This year, our governor and lawmakers in Hartford are finally working on a solution. It’s time that we all stand together to end this failed policy and move forward in a way that will lift our communities up and allow our state to move forward.

“One of the key features of the regulated system being discussed by lawmakers is that cannabis will be produced and sold by legitimate taxpaying businesses instead of by drug cartels and criminals. Regulation will also free up resources so that police can focus on more serious crimes and also help improve police-community relationships, and instead of continuing to fuel organized crime, the money spent on cannabis in our state can and should be used to help revitalize communities that have been disproportionately harmed by enforcement of laws against cannabis.

“To be clear, I do not recommend the recreational use of cannabis any more than I would recommend the recreational use of alcohol. We know that both of these substances can be abused, and adults who choose to use them should be expected to take responsibility for their actions. However, it’s clear that our state’s current policy of prohibition is failing everyone, especially our young people. And I also think that we as community leaders need to stand up and demand that those folks most directly harmed by this failed policy be involved in developing solutions. A new policy that is aimed at reducing harms rather than foolishly seeking to eliminate all cannabis use. Thank you.

Rev. Perez:
“I remember in 2018 in New Haven in the month of August, seeing bodies drop on the green. Looking out to buy marijuana and getting something else that was unregulated, something else that isn’t natural marijuana. What we’re not doing here is telling people to use marijuana, but what we are saying is that we need to control what people are setting out to get. We need to control how people seek out what they’re trying to look for instead of getting what they did not bargain for. We cannot regulate what is illegal, but what is legal we can regulate.

“We’ve known that forbidding substances does not help, but instead creates negative issues and problems across racial divides. Our Latinx community, our black and brown communities, are suffering much more, are four to seven times more likely to get arrested for just possessing marijuana, according to the ACLU in 2010. Forbidding a substance doesn’t work. You can ask any of these clergy about the story of the Garden of Eden, but allowing people to make educated choices and allowing people to be shown mercy and dignity is the way to go.”

Rev. Camp:
“I stand before you to say that I’m tired of our young, black and brown children, young men and women, having their lives disrupted when we can regulate cannabis, when we can make it available so it doesn’t penalize their lives. I don’t see in the scripture where this prohibition makes any sense. It should be the people understanding that they have to be responsible. And so we need to help people to be responsible, but prohibition is not the way. I applaud this effort and support it and it is my hope that this state will move into the new century and support a new way.”

Rev. Sharp:
“We’ve heard a lot about regulation this morning, and I’d like to say one small thing that’s so obvious, we overlook it. Critics of what we’re trying to do here today say, “The marijuana, the cannabis today, isn’t what our grandparents used. It isn’t what our parents used. It’s so much stronger today.” If that’s true, what we ought to do is regulate so that we can control, and people know what they’re getting. I’ve been working around the country but I can report from Illinois, which is my home state, that we became the 11th state, and we fervently hope that Connecticut will be the 12th, to legalize cannabis for adult use.

“What we’ve done and what you have the opportunity to do here, what we’ve done in Illinois, is build social justice and social equity into the program. I know you have parts of the bill that are calling for that. We have done that in Illinois. I can tell you that it’s possible. It will work. We’ve set aside 25% of the revenues from cannabis sales to be spent in communities that were ravaged by the War on Drugs. We are creating opportunities for minority businesses to get into the cannabis industry, and one very important thing that I’m seeing happen already is that our community colleges are now offering courses in cultivation and growing. It’s providing training opportunities for kids that very recently were in back alleys selling unregulated marijuana to people who certainly don’t need it.

“I urge you to follow the lead of 11 other states that have done this. Godspeed. We wish you well.”