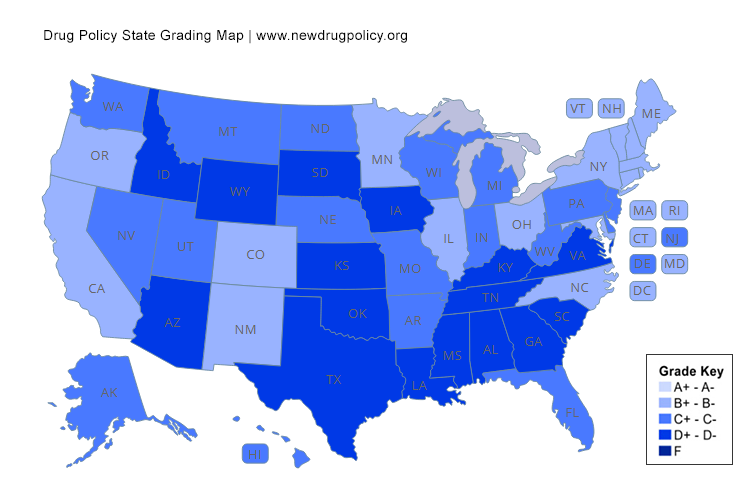 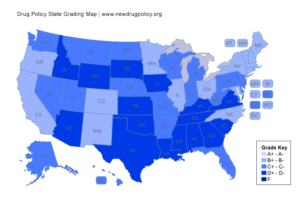 Let us be grateful for our U.S. federal system. In the face of a Washington bureaucracy mired in inertia and self-preservation, and a U.S. Congress reluctant to act, it is the individual states that will finally shut down our nation’s tragic and failed War on Drugs.

That’s why we must celebrate what happened in Michigan, Missouri, Utah, and Florida on November 6.

As our Drug Policy State Grading Map makes clear, each state has its own story to tell about where it ranks in the effort to end the War on Drugs and what it has just contributed to this goal.

Michigan became the first in the Midwest to approve marijuana for recreational use, joining nine from the East and West.  It raised its drug policy map grade for marijuana to an “A”, thereby achieving a composite grade across our entire agenda of B-, up from C+.  It falls short of a higher grade because of its punitive position on civil asset forfeiture and a limited Good Samaritan law.

Voters in Utah approved a ballot initiative legalizing medical marijuana.  This is remarkable in a state where over 60% of the electorate is Mormon, that is, members of the Church of Jesus Christ of Latter- day Saints, a religion which counsels its members to avoid any substance that might be habit forming, including tobacco, coffee and tea.

Even after the ballot initiative, Utah’s grade on marijuana policy remains “C”.  It is unlikely any time soon to join the 30 states that have either decriminalized marijuana or legalized it for recreational use.

Utah thus provides a significant precedent for those in other states trying to decide whether to move forward with medical marijuana.  I have just returned from recruiting clergy in South Carolina to support medical marijuana next year. When I point out that Mormons, even with their commitment to abstaining from all stimulants, can support marijuana as medicine because it brings healing, clergy get the point.

Missouri also approved medical marijuana, thus raising its marijuana laws to a “B”.  They have yet to decriminalize marijuana, that is, treating low-level possession as a civil offense, like a traffic ticket.

When it comes to “game changers”, perhaps the most remarkable event of November 6 was what happened it Florida.  Voters approved a state constitutional amendment to restore voting rights to felons who have served their sentences, including parole and probation.  This will change the status of 1.5 million individuals starting January 8.

Although this measure does not involve drug laws, it is part of our agenda. Why? Because it is the War on Drugs that has deprived so many people of the right to vote: over 6.1 million individuals are disenfranchised across the nation due to felony convictions.  Almost 50% of those in federal and 15% in state prisons currently are incarcerated for drug offenses.

Despite this dramatic step forward, Florida’s grade under this category increases only to a C+.  The state continues to limit access of convicted felons to supplemental assistance under the SNAP program and also operates private prisons. Both these policies harm large numbers of those convicted of low-level drug possession.

With the state actions in Michigan, Utah, and Missouri on November 6, thirty-three states, encompassing at least 65% of the national population, will soon permit medical marijuana.  Ten have now voted to tax and regulate marijuana for recreational use. Florida has decided it will no longer deny 1.5 million citizens their constitutional rights.

All in all, it was a very good day.