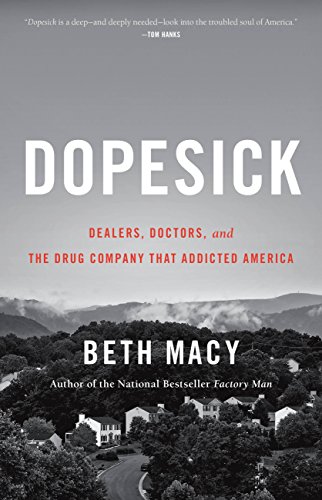 For nearly forty years a perfect storm has been building to create an opioid epidemic. Economic instability has plunged huge portions of the country into poverty with no escape in sight. An evolution in the way doctors considered patient pain–egged on by profit-hungry pharmaceutical companies–has flooded the country with opioids. Those in power turned a blind eye to the increased risk of addiction, and those who spoke out were ignored.

Journalist Beth Macy has become the great chronicler of Mid-American turmoil through her books Factory Man and Truevine. In Dopesick: Dealers, Doctors, and the Drug Company that Addicted America, released last month, she turns her gaze to the opioid epidemic. The stories she uncovers are shocking and horrifying, but the most surprising thing she finds amidst those whose lives have been ruined by opioids is hope.

It can be easy to think of the opioid epidemic or the War on Drugs theoretically. Many people do not personally know anyone who uses heroin or who is incarcerated for selling drugs. They might not have ever spent time in former mining towns or rustbelt cities devastated by economic depression, high unemployment, and skyrocketing rates of opioid overdose deaths.

In recent years, books such as In the Realm of Hungry Ghosts and Dreamland have offered readers a ground-level perspective. Their stories help us understand how addiction can consume and destroy lives, and how many government policies in the name of the War on Drugs only make things worse. Dopesick is the latest addition to that pantheon, explaining the rise of opioids in America and why it has been so difficult to break their hold.

What makes Macy’s exploration of the opioid epidemic so effective is its comprehensiveness. She begins by digging into the origins of the epidemic, shining a harsh light on the tactics of pharmaceutical companies like Purdue Pharma in promoting OxyContin. Bribing doctors and lying about data, Purdue relentlessly pushed the prescription of opioid painkillers, making hundreds of millions of dollars in the process.

Ultimately, Purdue was sued for blatantly untrue claims that the opioid painkillers they marketed were non-addictive. After failed attempts to bully the plaintiffs and get the lawsuits thrown out, Purdue was eventually forced to pay over $600 million in fines. It amounted to a drop in the bucket for the wildly profitable company, and Macy pulls no punches in painting it as a hollow victory. The damage was already done.

Next, Macy looks at the War on Drugs, following a group of law enforcement officers tracking high-profile traffickers in Virginia and Maryland. Men like ATF Agent Bill Metcalf embody the worst instincts of law enforcement, attempting to stamp out opioid addiction through aggressive policing.

Even with good intentions, the police officers and federal agents who think that we can arrest our way out of the opioid epidemic are only making things worse. Their tactics play out like a bad TV procedural, dehumanizing both addicts and dealers, all of whom are victims of a broken system. By shining a light on how law enforcement views and treats those caught up in drugs, Macy makes it clear why the War on Drugs has been such a fiasco.

If Macy is far more concerned with harsh truths than easy answers, it is because there are far more of the former than the latter. But in following a group of those struggling with opioid use disorders, and those who love them, she helps us understand why some are successful and others aren’t. It almost never has to do with the individual, and far more often is about the opportunities and support provided to them.

Medication-assisted treatment typically involves treating addiction with an opioid substitute such as methadone or buprenorphine. It is by far the most effective form of treatment for opioid use disorder, yet it is heavily stigmatized. Many rehabilitation programs refuse to accept those on MAT, demanding complete abstinence from drugs. There is a reason Macy chose to title her book Dopesick: those forced to endure the brutal symptoms of opioid withdrawal are driven to relapse, while medication provides much-needed stability, increasing the likelihood of recovery.

Fortunately, MAT is becoming more common. Doctors and public health advocates are learning to treat people where they are, rather than enforcing unrealistic standards of behavior. Dopesick does not offer a happy ending, though. There are still too many people dying because they cannot get the help they need.

What it provides, instead, is a path forward. There are alternatives to opioids, to opioid addiction, and to overdose deaths. The strategies are not easy or simple, requiring coordination between multiple levels of government and the public, as well as a complete reframing of the causes of and solutions to addiction. There are going to be more stories like those told in Dopesick. Maybe someday soon, those stories will end in triumph.