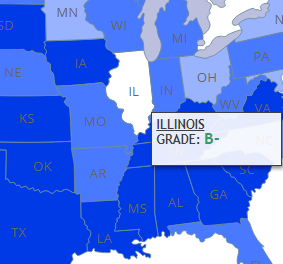 I live in Illinois. My state has received a B- in its approach to the War on Drugs and how it aligns with a “health not punishment” response to drug use. This grade tells me that we have some important changes we can and must make.

We must move to taxing and regulating marijuana, legalizing low level recreational use. I am pleased that we have decriminalized marijuana so that low level possession is treated as a civil offense, like a traffic ticket. However, marijuana arrests continue, especially in poor neighborhoods of color. The illicit drug market encourages gang activity and violence. Prohibition of marijuana breeds a War on Drugs mentality. Police continue to be seen as a hostile presence just over marijuana.

We must seek to do more than reform civil asset forfeiture.  We must abolish it. With the ACLU taking the lead, Illinois has reversed a laughable part of a bad law. When police seize property allegedly related to a drug crime, the burden of proving guilt now rests with the government rather than the accused. But our grade is still a D+. The standard of proof is too low: “preponderance of evidence,” rather than “beyond a reasonable doubt.” The government does not even have to establish that a crime has been committed. Police retain and fund their budgets with the proceeds they seize. Conflict of interest continues almost unabated.

I am heartened that we are finding ways to ways to save lives, ease suffering, and help people restore their lives through harm reduction policies. We no longer insist upon the “abstinence only” demand that has dominated this country’s approach to drug use and recovery. But I do not understand why we do not provide Medicaid coverage for access to methadone. This could permit many people struggling with a heroin abuse disorder to work and remain with their families while receiving treatment.

Fortunately, we do not have private prisons in Illinois, nor do we send prisoners to private prisons out-of-state. Thus, we do not support an industry that lobbies for laws that wants as many people in prison as possible. But even after those convicted of drug felonies have paid their debt to society and been released from prison, they are denied access to key benefits, including nutrition assistance. If we can change this, our grade will be an A rather than a B+.

Our state map does not yet track some important things we are working in Illinois. Sentencing reform is critical.  We are hoping for a bill that would reclassify most low-level drug offenses as misdemeanors rather than felonies. We are about to become one of the first states to pass legislation that provides a roadmap for police departments to divert drug abusers to treatment rather than jail or prison. And we may well be the first state to make it possible for our medical marijuana program to help those suffering from opioid abuse.

We are making progress in Illinois. This new map shows me where we should concentrate our efforts.  What does the map tell you about what you can do in your state?