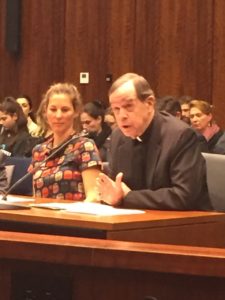 I am the Rev. Alexander Sharp, Executive Director, Clergy for a New Drug Policy.  We reach out to clergy nationally to end the War on Drugs and seek a health, not punishment response to drug policy.  Because we are based in Illinois, and I have been doing faith-based education and advocacy work for over 20 years, a substantial number of clergy and lay leaders in Illinois are aware of our work.

Many clergy support marijuana legalization because of our sense of how best to influence and even change behavior, especially of our youth.  What the failed War on Drugs has taught us over the past 45 years is that prohibition does not work.

Why?  Prohibition refuses to accept reality.   Drugs are a reality in our society.  Cigarettes, alcohol, and potentially addictive behaviors like gambling are with us.  The issue, therefore, becomes how to prevent not use but abuse.  I wish someone would make this point to U.S. Attorney General Jeff Sessions when he appears to say that all drug use is bad.

Instead of prohibition, we need to focus on preventing abuse though regulation and education.  Cigarettes are legal, but smoking has gone down by 50% in the last 25 years.  Alcohol is legal, but that we have made progress here as well.  Marijuana is illegal, and use has not gone down.  What’s wrong with this picture is that with marijuana, we have persisted in mindless prohibition.

I stress to my clergy colleagues that “legalization” is the wrong word.  We seek the “regulation” of marijuana.  That means that marijuana now obtained in the illicit market will be clearly labeled and packaged. People will know what and how much they are using.  That is far from the case with back alley and school yard purchases.

I’ve used these policy arguments with clergy across the country, and they get it. But beyond these policy wonk arguments, at the end of the day, we must educate each other, especially of our young people.  We must communicate with them in a way that makes sense to them.  They need to trust us.  I don’t see how that is possible when we equate marijuana and prohibition.

Our youth didn’t believe us when we preached “Just Say No” in the 1980’s.  When it comes to marijuana, they do not believe us now. The DARE programs where a law enforcement officer stands in front of a classroom and says “this is your brain on drugs” didn’t work when they were first tried.  These programs have adjusted since the 1980’s but they are still not effective.

I have attended many conferences where medical experts have described in elaborate detail how marijuana if heavily used can be harmful to young, still developing brains.  It can affect motivation.  I believe them. The problem is not that these facts are wrong.  Our kids should hear and take to heart every one of them.  The problem is that it is very hard to communicate them in the context of a policy – namely prohibition – rooted in abstinence.

Further, the very concept of harm reduction is impossible if abstinence is the only response to drug use.  To deny the goal of harm reduction is immoral.  The best in our faith traditions tells us that persuasion, with compassion, mercy and forgiveness; rather than punishment – in the form of jail and incarceration – are the best paths to changing hearts and minds.

All of this gives us a response to one final question that is frequently asked:  We’ve got alcohol and cigarettes, but why marijuana?  Do we really need another legal drug? My response: if really believe regulation and education are the best way to shape individual moral behavior, we should legalize marijuana even if alcohol and cigarettes had never happened.

Marijuana legalization stands on its own merits.  That why I urge your support for SB 316.