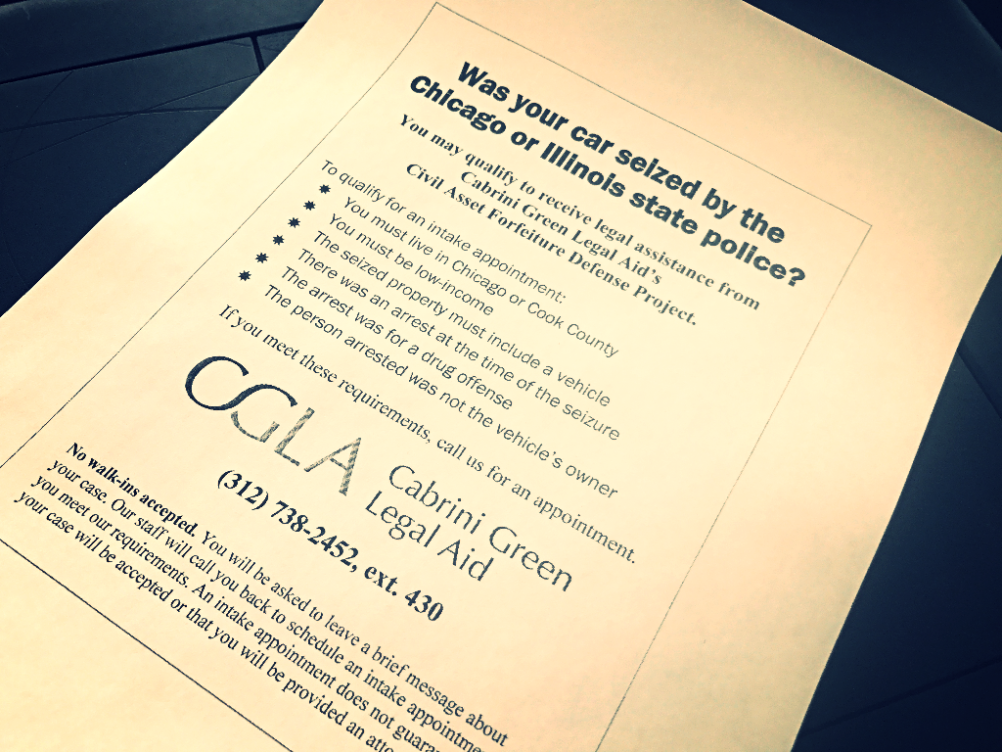 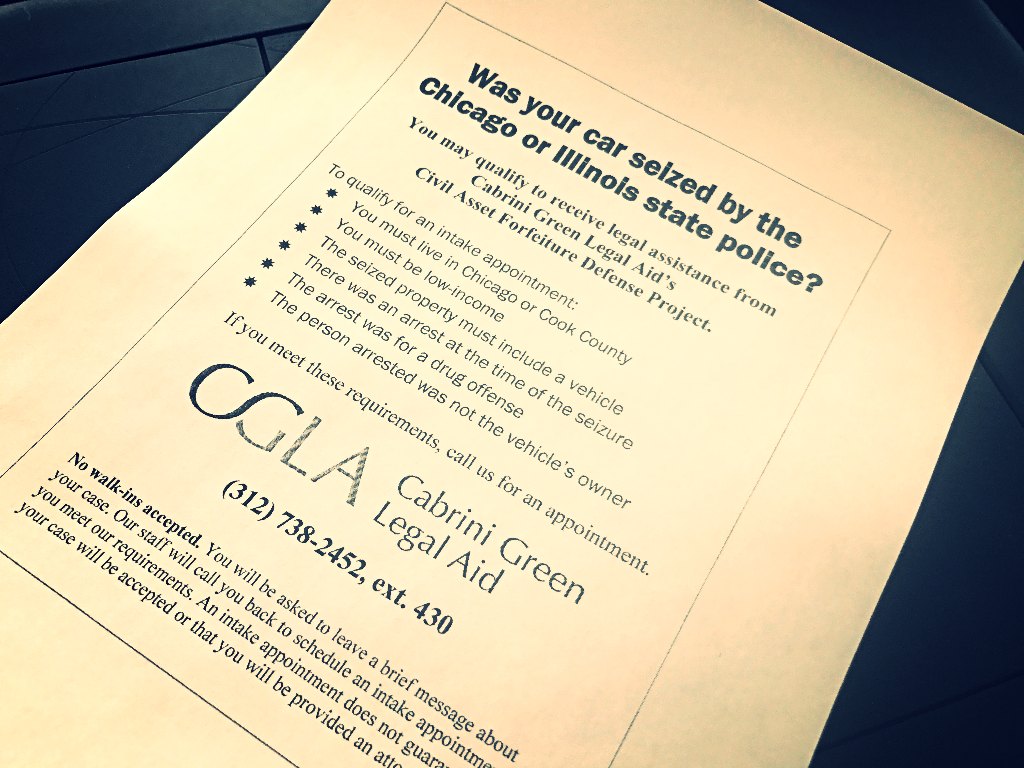 Those fortunate enough to see this flyer will have access to legal representation.

It’s easy enough to read about civil asset forfeiture and be angry at a system that seizes property and keeps it until the owners prove they have not committed a crime. Last week we wanted to get a more personal, first-hand view, of how the process works.

All proceedings for civil asset forfeiture in Cook County are held in Room 1707 of the Daley Center. Anyone can go. We sat in on a docket of cases.

Four prosecutors from the Cook County State’s Attorney were present. No one represented the four defendants waiting to be called. All were African-American.

Each of the first two defendants came forward and was told that their cases were being “continued” either because no police officers were present, or because the state was not ready. They nodded and left.

It makes a difference when legal counsel is present. A lawyer named Andrew Hemmer is based at Cabrini Green Legal Aid. He has a two-year fellowship to take on forfeiture cases. Two cases were heard. He represented one of them.

In each instance, a car’s owner had given permission to someone they knew to use it. Police had stopped the car and said they found drugs, in one instance marijuana. The owners said that had no knowledge of, and had not given consent to, drug activity involving their car.

The state’s attorneys had no proof that the property should have been seized. They offered no argument. The judge ordered their property released.

Illinois earns a D- for its civil forfeiture laws:

The next day, we went to see one of the owners. She is a nail technician at 22nd and Michigan. Until Cabrini Green Legal Aid became involved, she had been without her car for over nine months. Why?

State law says there should be a preliminary hearing within 14 days and a hardship hearing after 21. No procedures exist for her to learn this. The City pound at 400 W. Superior was not helpful.

She was supposed to receive a notice by certified mail of possible forfeiture within 45 days after the preliminary hearing and return a “verified answer” within the following 45 days. She does not recall receiving this letter.

Someone suggested that she talk to clerks on the 6th and 7th floor of the Daley Center about how to reclaim seized property. No one there seemed to know.

She says her case was continued 10 separate times. At one point she asked permission to get her belongings, including equipment for her nail technician work, out of her car. The state’s attorney refused. She recalls saying “You can’t be serious” and then being accused of threatening behavior.

Finally, about three weeks ago, she happened – purely by chance – to notice the flyer telling of Cabrini Legal Aid services. After two minutes of testimony, accompanied by a lawyer, she got her car back.

One knowledgeable individual estimates that a significant majority of all individuals subjected to civil asset forfeiture fade away before filing a formal complaint that might result in the return of their property.

This estimate seems reasonable. Those who have lost property are on their own. Usually, they are very poor. They have no way of knowing their rights or how to pursue them. They are victims of confusion and hassle.

The Institute of Justice, a national not-for-profit organization, grades states on civil asset forfeiture. Illinois has been given a “D-”. As I left the nail technician’s office, her last words were, “They should have received an ‘F.’”