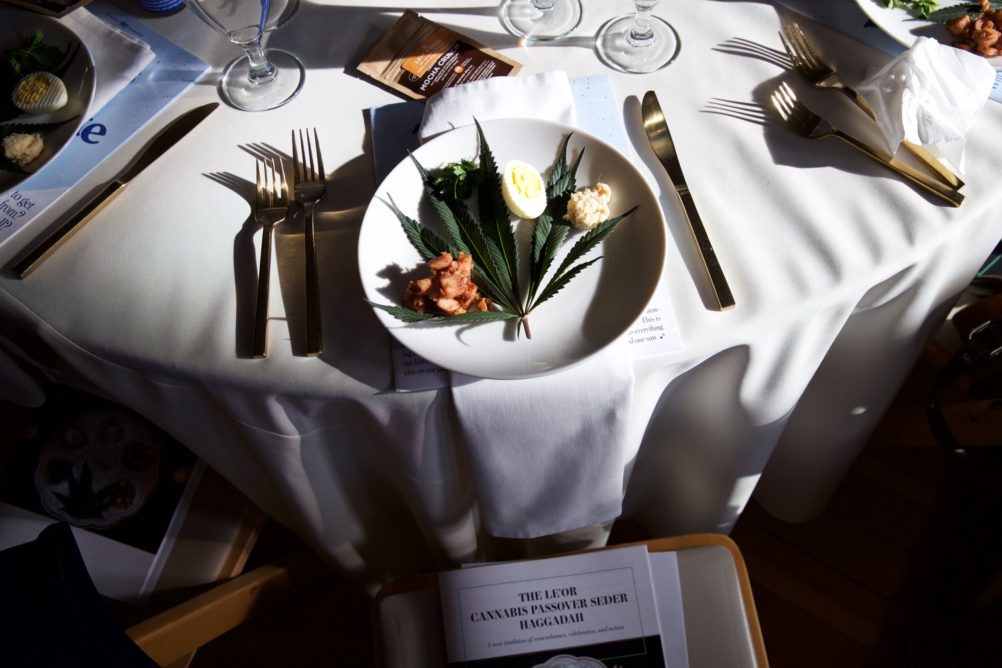 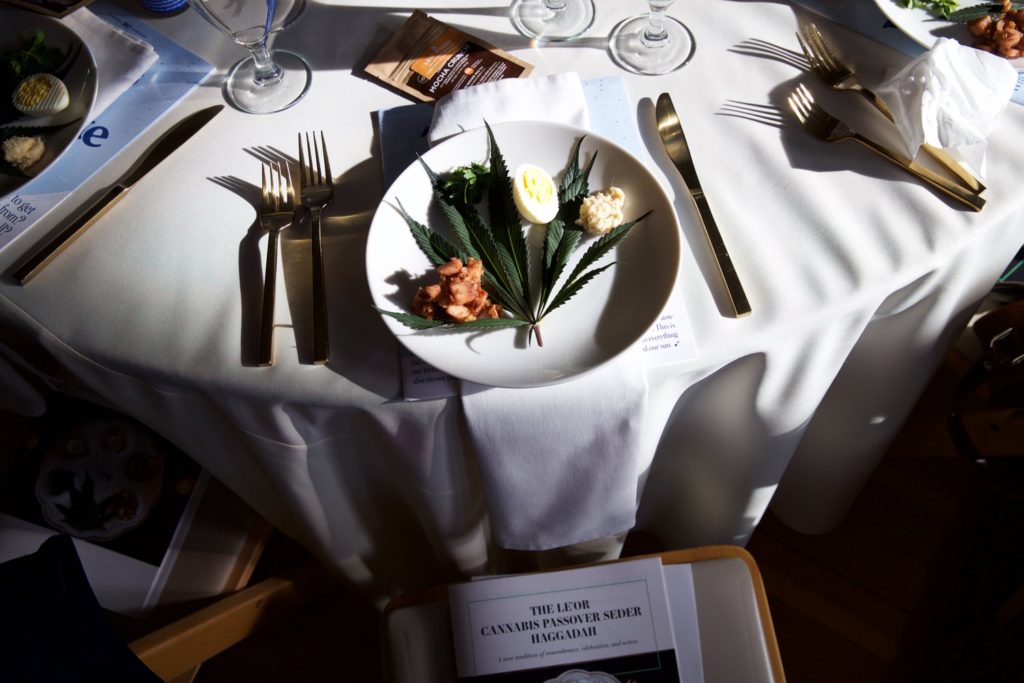 Seder plate from The Le’Or Cannabis Passover Seder. To learn more about the Seder, listen to an interview with Claire Kaufmann or take a closer look inside the event.

Claire and Roy Kaufmann are co-founders of Le’Or, a Jewish activist organization based in Portland, Oregon. Their cannabis seder on April 15 was their second such event. Over 70 individuals from the cannabis industry, along with drug law reformers, clergy, civic leaders, and others were present. In a recent radio interview, Claire described the connection between Judaism and cannabis, the purpose of this annual event, and its relevance to ending the War on Drugs. Here are excerpts from this broadcast.

“So, what is Passover? The Jewish holiday of Passover is the most observed holiday, more than Rosh Hashanah, more than Hannakuh, more than Yom Kippur. A larger percentage of Jews go to a Passover Seder than anything else.

“The holiday of Passover commemorates the Jewish exodus from Egypt. We weren’t always slaves. We were actually a very vocal and well-respected minority. The Pharaoh came to power and perceived us as a threat, and he enslaved the Hebrews, as they were called at that time.

The story of Passover is a ritual. Seder is the Hebrew word for order. To commemorate this experience of being slaves over time and of our liberation, the ritual of the Passover seder evolved. The seder is a ritual order of doing particular things that help us remember.

“Passover is not only about celebrating our own redemption, our own freedom, it’s about reminding ourselves of our responsibility to fight for the freedom of all people. In fact, a civil rights seder has been around since the 1960s. There are all kinds of seders –chocolate seders, feminism seders, any kind of seder you can imagine, always overlaid over the traditional stories.

“It all works very well because the stories of the exodus from Egypt, and the end of slavery arc eloquently over the story of cannabis legalization and the end of the War on Drugs. We are remembering how lucky we are to be free while not forgetting the roads we have ahead of ourselves to bring an end to federal prohibition. We must make sure that people are not incarcerated for something that is a healing plant. 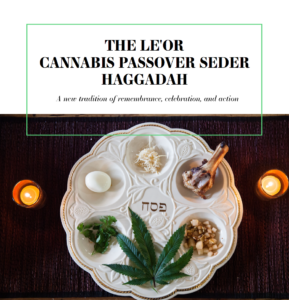 “We find a breadth of reactions to the cannabis seder. One of the reasons we founded Le’Or, and felt that we even had a mission to play, is that we spent our whole first year researching why the Jewish community wasn’t coming out of the gate, being more vocal on legalizing cannabis.

“Never mind the fact that Israel is one of the leading medical cannabis research countries in the world; or Ethan Nadelmann, former executive director of the Drug Policy Alliance, is the son of a rabbi; or that Seth Rogen made a movie Pineapple Express. People always say Jews and cannabis go together like bagels and lox, and that’s absolutely true.

“As we began to create Le’Or we found that rabbis were not interested in talking about this issue- — at all.  The rabbis basically said ‘There’s no reason why I should touch this issue with a ten-foot pole. It’s a liability for me, my donors are doctors and lawyers, you know, why bother?’ So we realized this had to come from the ground up if it was to be movement that came from the Jewish community.

“Our idea for a cannabis seder began to be pretty well-received in the reformed and conservative and more progressive communities, but not as well-received in the traditional communities. The Passover Seder is such a holy thing that bringing cannabis into it from their perspective feels diminishing, whereas we would see it as elevating the conversation.

“In Hebrew, the word for cannabis is “kineboisin”, which appears multiple times in the Torah. Cannabis actually is part of the holy anointing oils at the Temple. So Jews and cannabis have been friends for a long time. Also, the orthodox rabbis, I believe in New York, just said cannabis is kosher.

“What we’re discovering is that people aren’t just smoking pot for fun. People do that and if you’re someone who does that then check out this online headshop or simply find one yourself. But it seems more and more people are finding a role for cannabis to play in their lives. And I believe spirituality is part of that. There’s that nexus between our spirit and the cannabis plant itself.”

Listen to the full interview from the Russ Bellville Show at the Le’Or Life Blog.