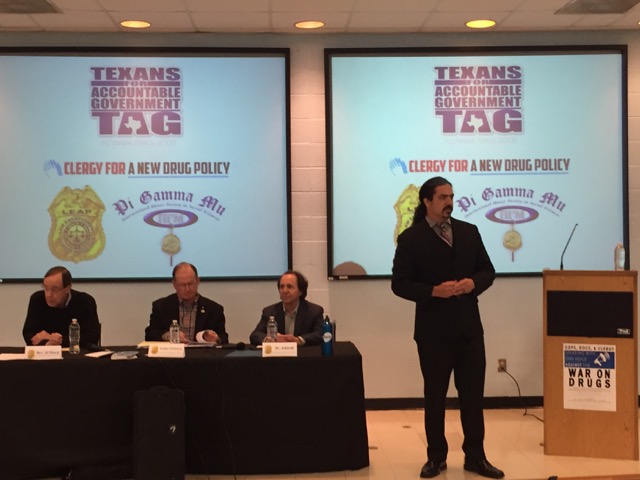 The program CNDP helped to initiate recently in Rhode Island — “Ending the Drug War, Healing Our Communities: Cops, Docs, and Clergy Speaking with One Voice” — is becoming increasingly visible. On Saturday, February 13, I went to Austin, Texas to join a district judge and an addiction psychiatrist on a panel before Republican Liberty Caucus State Convention, as well as at a gathering of Texans for Accountable Government. Common themes were that the War on Drugs has failed and is more harmful to individual lives than the marijuana use it seeks to prohibit. Here are excerpts.

“You can’t arrest your way out of our country’s drug problem. When there is a rape, and you arrest a rapist, you stop the number of rapes. With drugs, when you arrest someone who is pushing drugs, you just create a job opportunity for the next dealer.”

“In Texas, we arrested 69,000 people for marijuana offenses in 2014. For all other crimes – murder, manslaughter, negligent and non-negligent, rape, robbery, aggravated assault, burglary, motor vehicle theft of homes and business, arson, fraud, embezzlement, and others – the total was about 59,000. Ninety percent of these cases were for offenses of one ounce or less, an amount you can put in the back pocket of your blue jeans. Good use of resources, right?”

“Criminal prosecution not only does not solve the drug use problem, it exacerbates it, in two ways. First, criminalizing marijuana makes it a gateway not to the drug itself but to people who are pushing a lot of other more dangerous drugs. Sellers get plenty of money from selling marijuana but even more dollars from drugs other than marijuana.”

“Second, criminal prohibition creates an opportunity for gain for people who can’t support themselves in any other way. They might be eligible for school or job training. But once they have a criminal record that’s impossible.”

“Some neighborhoods in Chicago look like third-world countries partly because of the criminal problem with drugs. People form gangs to control the traffic. Once they have criminal records, the only thing left for them to do is to become soldiers in the criminal market.”

“How can one get people to pay attention to the way the drug war contributes to violence? It’s difficult because it’s counterintuitive not to fight a war against something you think is harmful, like some drugs are. If you see polio, you fight a war against polio. Measles, the same thing. But there’s a big difference. You don’t lock up people who get polio, or measles.”

“The only way to make the case that prohibition leads to violence is to show people real world examples of the alternative. Portugal has decriminalized all drugs and offers treatment, and violence and drug use have not increased. Marijuana consumption per capita in Netherlands is about one-half compared to the U.S. This is an answer to those who say that if you lighten drug laws, you are inviting more use. Marijuana use by teenagers has not increased in any of the 23 medical marijuana states.

“Punishment does not work. Jesus knew this better than anyone. But who really understands his message?”

“What was my turn-around moment? Honestly, I didn’t think about it that much as a young lawyer. In the late 1970’s I represented a guy locked up for probation violation because of marijuana use. He was arrested and held without bail. He couldn’t afford lawyer. The district attorney wanted to send him to prison. Bless his heart, the judge said, ‘I’m going to give you another chance.’ It worked. Every year for 13 years, I got a thank you letter from this guy’s family.”

“My stepson has difficulty with drugs. All jail gives him are new tattoos and less employability.”

“The big change came for me in 2008 when I heard Jerry Epstein of the Drug Policy Forum of Texas. He pointed out that people who use drugs in their youth most often don’t continue. It’s an experiment. But to the extent that the people get caught, drugs really are a life-altering experience. They can’t get a job, housing, education.”

“There’s saying with LEAP: ‘You can get over an addiction, but you can’t survive a conviction.’”

Dr. Bryon Adinoff
Distinguished Professor of Alcohol and Drug Abuse Research in the Department of Psychiatry at the University of Texas Southwestern Medical Center, Editor-in-Chief of The American Journal of Drug and Alcohol Abuse

“I want at the beginning to make clear that I am speaking to you as an addiction psychiatrist and do not necessarily reflect the opinions of my institution. ”

“When you hear individuals with addictions describe their symptoms, whether to drugs or alcohol, you know where it’s heading. The stories are much the same. They typically describe the symptoms listed in the psychiatric diagnostic manual, DSM-5, for Substance Use Disorder that include loss of control over their drug or alcohol use, compulsive use, craving, and adverse life consequences.”

“And yet these symptoms are sometimes caused by substances that are in some cases are legal, but in other cases illegal. Whether a substance is considered addictive and the dangers to the individual and society, however, has little to do with whether it is legal or illegal. The legality has to do with present-day politics, social context and cultural sensibilities.”

“The parents of many kids can get them out from under drug charges. This is not true for many others. The penalties are so often not about the drug.  They’re about the social and economic environment people one grows up in, and the color of one’s skin.”

“Our country only has so many resources. Yet we spend more on drug interdiction, arrest and incarceration than we do on treatment, yet these approaches are typically not effective and cause tremendous harm. Right now, two-thirds of the dollars spent on the Drug War is for interdiction, arrest, and incarceration and only one-third is spent on treatment. If we flipped this, we’d have far more impact.”

“Why don’t addiction doctors and therapists speak as I am today? It’s understandable because they see the harm, but what is often not so are the moral, social and economic consequences of the Drug War. So when you look at the trade-off, the Drug War is just not worth it. The consequences far outweigh the good.”

My comments were drawn from “Values at Stake” and “Protestant Faith Perspectives,” both on the website of Clergy for a New Policy.