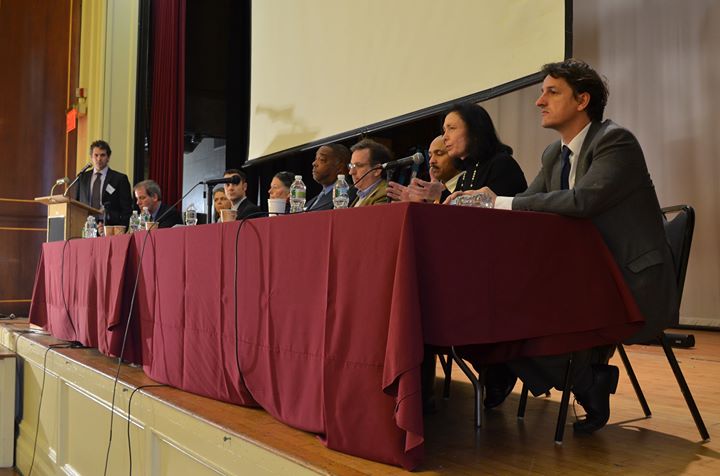 On Saturday, December 5, 2015, CNDP was privileged to participate in the symposium “Ending the Drug War, Healing Our Communities: Cops, Docs, and Clergy Speaking with One Voice” in Providence, Rhode Island.  Police officers, health care professionals, and clergy all spoke from distinct vantage points about the need to strengthen communities.  You can read some of their insights below. We are grateful to Rev. Santiago Rodriguez and Gloria Dei Lutheran Church of Providence for hosting us. “The church has been judgmental, not inclusive.  We have banished this topic (drug use and addiction) though surely we shouldn’t have.  Keep in mind – one in every eight has a lived experience with addiction.  Life is not that simple.  How much of this can be brought up in a church setting?  This raises question of intimacy.  This is not an easy question.  But church is too busy being respectable.““Our faith message should be one of radical inclusivity, not creating ‘the other’ in our society.” “We need a new policy shift.  We are not going to arrest our way out of the current paradigm.  We set up people to fail and act surprised when they turn to what pays the rent.” “What is a drug free society?  In fact, we are a highly drug-using society: Caffeine, all kinds of prescribed medication, energy-enhancing, or diet-aids, sleep.  We use drugs all over the place.”

“Health outcomes depend on the social context in which we live.  But today we intervene only against individual sickness rather than seeking a “well” environment.” “About 80% of the population will perhaps experiment with drugs at some point in their life, but not use.  They will simply stop.  About 20% will use but without a problem.  Perhaps 5% will have a problem, but most will be able to address with intervention and treatment.  About 1% will be in serious danger.” “A new addiction medicine specialty is needed.  We must switch from traditional medical function to a true public health model. The test for the medical profession is whether we can design that.”

“What we have talked about as community policing is now needed for medicine.  We need new forms of intervention: especially early intervention and safe-injection sites.” “Our current drug policy is counter to public safety.  Police-community relations are damaged by the War on Drugs. When you call something a war, everyone becomes warriors.  Everyone becomes your enemy.””When people go to prisons, what do you think their kids do? War on black and brown populations has decimated family units.  We need to go back and do whatever we do when we fight a war; help rebuild the communities we have destroyed.” “Since 2007, 165,000 people in Mexico have died as a result of the Drug War.  In the same period in Afghanistan, the figure was 21,500.  The United States spends $55 billion a year on law enforcement against drugs.  Think what that money could do if it were used not for military action but on treatment, research, education, prevention of addiction.” “For over 600 years, Christians have struggled with the concept of A Just War.  The current War on Drugs fails drastically short against all six criteria.”

“The War on Drugs also cannot be justified by any of the following four concepts of justice: retributive, restorative, procedural, and distributive.” “There is no such thing as a “Drug Free School Zone.” There are over one million dealers in high schools.”

“The drug trade is currently a $500 billion market with no insurance and no regulation.  Kids don’t know what stuff they’re getting; it can be mixed with talcum powder, chalk, flour.”