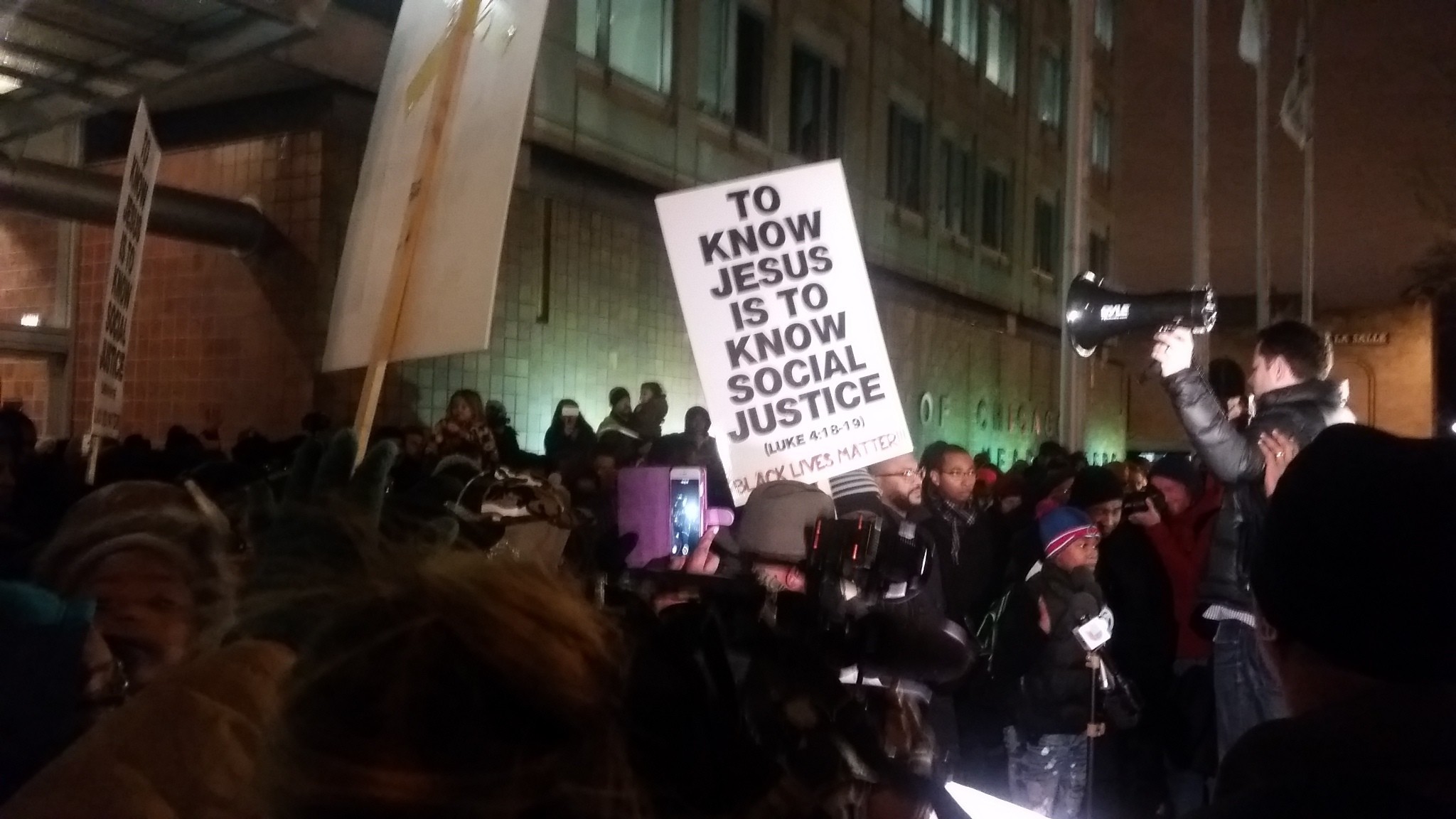 Since the release of a video showing Laquan McDonald being gunned down by police in the streets of Chicago, the atmosphere in the city has been a mixture of disbelief, tension, and even fear.  But at the same time, something remarkable has happened.  Public demonstrations have been peaceful. The protesters, though determined, have conducted themselves with discipline and restraint.

On the morning of Black Friday, a crowd of over 2,000 marched through Chicago’s iconic shopping district, stopping traffic on Michigan Avenue’s “Magnificent Mile.” Many protesters spent the afternoon blocking shoppers from entering stores. All of this could have erupted into violence and mass arrests. It did not.

On Monday evening, religious leaders held a prayer vigil on the steps of Chicago Police Headquarters. Among the crowd of over 300, there was not the slightest hint of violence. Clergy called for unity. Those present held hands and prayed and, after about an hour, dispersed quietly into the night.

There have been other events, including at least 100 protesters who convened at noon Tuesday outside Mayor Emanuel’s office in City Hall. They taped sheets of paper with red handprints on them to his glass door to symbolize that the blood of Laquan McDonald is “on his hands.”

The outrage fueling these protests is clear. Why then, so far at least, has Chicago not experienced the outbreaks of Ferguson, Baltimore, and New York? Arguably, Chicagoans have more to be angry about. In other cities, charges against police officers were filed within a matter of weeks. It took States Attorney Anita Alvarez thirteen months to respond to McDonald’s shooting.

It could be that Chicago police have become riot-savvy. With the 2011 Occupy Chicago movement and the 2012 NATO Summit, the city has been there before. The police have a lot of experience in containing crowds without provoking them.

But I think there may be a deeper reason. The protesters represent only the tip of a deeply enraged public.   The cover-up of police shooting videos, giving “hush money” to the family of Laquan Mcdonald, and taking thirteen months for charges to be filed have resulted in profound public anger, even disgust, of Watergate proportion.  As Alderman Walter Burnett was quoted as saying, “Even my Korean cleaner is upset.”

Given this level of public outrage, the opportunity exists to make a dent in that most intractable of social realities — institutional racism – and the demonstrators know this.

Violence is distracting. It consumes energy to no purpose. It takes our eyes off the goal of dismantling the racism embedded in our institutions. This, I believe, is the secret that those leading the demonstrations in Chicago have now discovered.

Police Superintendent Garry McCarthy was fired because he failed to take on the police union which, by protecting its members from review, leaves rogue cops on the street. People of color are disproportionately the victims of such self-serving union policy. That’s why it’s institutional racism.

Those calling for States Attorney Alvarez to resign as well can acknowledge that it would be very difficult for her to file charges against almost any police. Prosecutors rely on police to make their cases in court. But in the case of Laquan McDonald, her failure to file charges against the officer who shot him sixteen times constitutes institutional racism.

The protesters in Chicago know that changing the leadership is only a first step. So far they have shown stamina and focus. Their ability to continue in this way offers the possibility of significant change not only in our leaders, but our institutions.