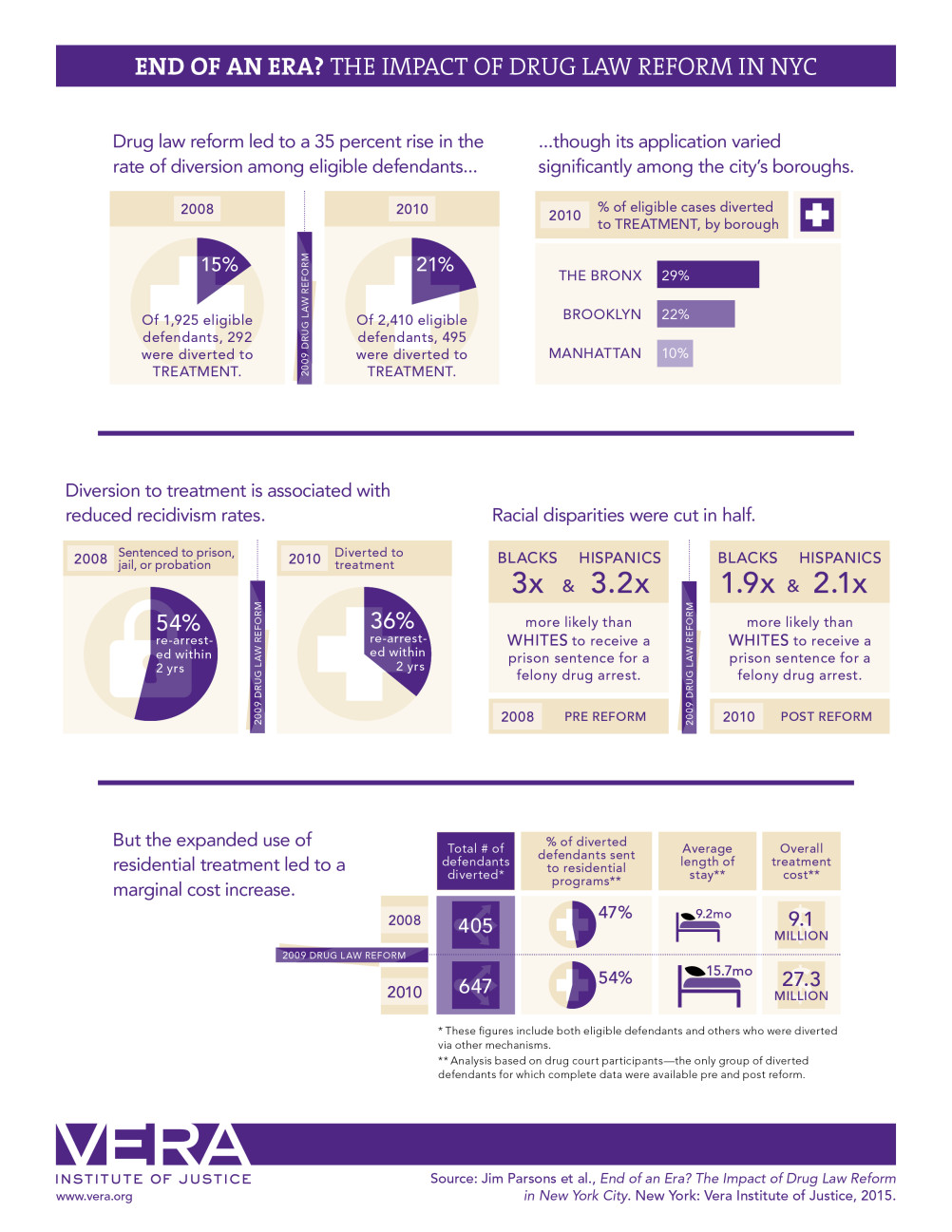 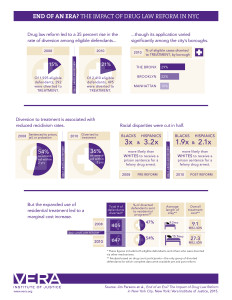 End of an Era? Infographic

A January 2015 report by the Vera Institute of Justice entitled “End of an Era? The Impact of Drug Law Reform in New York City” examines the early implementation of 2009 reforms to the Rockefeller Drug Laws, finding both successes and areas to improve.

In 1973, the Rockefeller Drug Laws were established in New York, making the state one of the first jurisdictions to require long mandatory minimum sentences for a range of drug offenses. As detailed in the CNDP War on Drugs Timeline, the Rockefeller Drug Laws created mandatory minimum sentences for selling two ounces or more of heroin, morphine, opium, cocaine, or marijuana and/or possessing four ounces or more of the same substances. The sentences were 15 years to life at minimum and 25 years to life at maximum. The severity of these laws, named after Nelson Rockefeller, New York state’s governor at the time, made New York infamous for having the toughest drug laws of any state in the country. They also marked the beginning of the War on Drugs, a war which has led to a dramatic increase in the total prison population, specifically an increase in people incarcerated for drug offenses—in NYC, the number grew by a factor of 15! Our country’s prison population is noticeable not only for its dramatic size, but also for the striking racial disparities. According to the report, for every white male between the ages of 21 and 44 incarcerated for a drug offense, there were 40 black men behind bars for the same reason.

Because of the devastating impact of the War on Drugs, in recent years many voices across the political spectrum have been calling for reforms. In April 2009, the New York state legislature decided to eliminate mandatory minimum sentences for low-level drug offenses and increase the availability of diversion programs. These reforms officially took effect in 2010, and as the Vera Report evinces, several aspects of the new laws have been successful, while other areas could be improved.

The successes include the increase in the use of diversion, which has opened the doors to treatment as opposed to punishment, especially for people with more extensive histories of drug use and crime. Diverting defendants to treatment also decreases their chance of being re-arrested; the report found that those diverted were re-arrested fewer times on average and had fewer arrests for felony offenses compared to those who were sentenced to jail, prison, or probation. Unfortunately, only a fifth of the people eligible for diversion programs under the new laws have actually been enrolled in treatment. The report suggests that more must be done to expand access to treatment. Additionally, while racial disparities have been cut in half in just two years since the reforms, significant disparities persist because of racially disproportionate sentencing practices. It is imperative, as the report suggests, “to establish metrics to track the racial impact of decisions at each stage of the process, find practical ways to decrease bias in decision making, and hold prosecutors and judges accountable for following these good practices.”

The findings of this report are critical for better understanding the impact of drug law reforms and diversion programs, as well as for replicating these reforms and programs across the country, steps which are essential for alleviating the devastating impact of the War on Drugs.